Nope, not those sort of moves. Not the ones related to well timed button presses of deft flicks of a stick or mouse. Moves in the real world, those related to house and home.

I’ve lived in the UK all my life, all 38 years plus. Linda however has never spent more than 13 years in any country having moved from Denmark to Norway to the UK. And this year would have been her fourteenth here, thus fate has decreed that we should move on, and it is a return to Denmark that is on the cards. Though not as one might expect to return to where her family are from, that being northern Sealand (Sjælland) but to a rather remote island by the name of Bornholm. It’s an island of some 40,000 people, quite similar in size to the Isle of Mann for our UK based readers, and in many ways it could easily be a location in World of Warcraft so diverse is the terrain.  From near white sand beaches in the south, through to the forested middle on on to the craggy rock faces of the northern shores, we quite fell in love with the place during last years holiday. We had reason to be there though, a part of Linda’s family are already living there now and so we will be creating a bit of a clan there as not only ourselves but Linda’s parents will also be living there.

This may seem an odd choice to many, particularly as we will be sharing the house with Linda’s parents. I realise not everyone has a positive relationship with their in-laws. Thankfully though I do, and the house will be split in floors, allowing us a retreat when required to our own space, sharing only the kitchen. The was also the draw of value for money, property on the island is very cheap compared to anything in the mainland of the UK, at least that we have seen. For little more than we will be getting for our three bedroom semi near Liverpool we have been able to buy an old farm house consisting of four adjoined buildings and a good bit of land. Something we could never dream of owning in England these days. Of course there is a price to pay for this, there are not a huge number of jobs to be had locally so I will be relying on my computing skills to find work I can do remotely and we have ideas for some web based business opportunities also. So money will not be something as readily available as it is right now, but then that isn’t really what this move is about. It’s about obtaining a better quality of life, of living in a place were we can feel safe, were we can step outside out door and go for a walk or a cycle without worrying about dealing with excessive traffic and indeed in many cases being able to use cycle paths separate to the main road system. A chance to get fitter and eat healthier foods by being closer to local sources of good produce an ample amounts of fresh air. To become people whose lives will become more outside bound.

Not that we will be giving up on our gadgets, the plans we have for our own space in the house are heavily geek influenced. There will still be his and hers computers in an office space. Games consoles will litter the shelves of our own living room, and the house will obtain a substantial network setup to keep everyone there online 24/7. There are even long term plans for a cinema area, or dreams if not plans. But it will certainly be a catalyst for change in us, at least that is what we plan and hope for.

So you may see less games and gadget related posts here, and far more general life ones,  but there will still be that same emphasis on doing things together and thereby getting more out of them (Stop sniggering at the back!).

I hope this will still interest you all.

My gaming schedule of the past few months has not been of my own choosing. However far from this being due to some subversive mind control I have chosen to have my gaming dictated by the choices made of two of my favoured podcasts. Namely those being GameBurst and Cand & Rinse.

We all know the joy of being swept up in the latest releases, joining in the twitter gossip and forum posts that erupt whenever a new game comes along. However following such practices can become a very expensive pastime, requiring day one purchases of games.

How then to capture that sense of community and belonging without the cost of day one buys? Why by tracking the gaming choices of GameBust’s Replay show and Cane & Rinse’s weekly output. Both shows deal with games that are removed from the wave of the new by at least a few months, and sometimes years. Picking up a game you don’t own to ‘play along with’ becomes a far more economical choice, and yet you can still get that same sweep of excitement and belonging that chasing the new instils. Sharing thoughts with others that are playing the same games around the same time, twitter comments and forums posts are all there in check. Plus you may well find missed gems that you never knew were out there such as I have in Valkyria Chronicles.

For me this has become a very good way to keep involved without the incessant rush to keep up with the ever increasing barrage of new releases. Long may it continue! 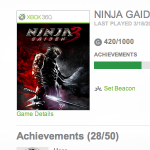 I wonder if those avatar facial expressions are hints to the overall review?? 😉

I’ve long been an advocate for the world of Android. I’ve favoured it’s openness over the protected walled gardens of iOS since before I owned my first Android device. Then when I actually escaped from the world of mobile phones into smartphones with the Samsung Galaxy I never looked back. It may have, back then, lacked the elegance and super focused vision of Apples output, but for a PC loving geek just as myself the parallels to a user customisable experience where far closer to what I wanted. I did’t want to be told how my ‘personal assistant’ should look or operate, or what it could or couldn’t do.

However no matter how much I go on about Android, and how much of a powerhouse the current systems have become I’ve only ever experienced things from the user point of view. And this is something I plan to change in the coming years. I’ve already played with the Construct 2 game creator that can produce touch screen games as an output choice, and next I plan to actually rekindle my programming skills and have a look at coding for Android. How far I will get is anyone’s guess as it’s been many years since I programmed in any serious way, my career headed down a more graphical drag and drop road were my education of IFs and SubRoutines were of little use. I’ve felt more like a ‘Super User’ than an actual Information Technology associate for far too long, my BSc left rusting on the shelf.

But it’s a world I miss. There is a beauty in the code for me, a simple logical progression of data which my mind craves to control.

And so I plan to become one with the ‘droid. May my blood run green!